St. George′s Church and the Mausoleum of Karadjordjevic dynasty is located on top of Oplenac hill, in the town of Topola, Serbia. The rocky terrain used to be interspersed with crooked trunks of a kind of oak tree and because of their naturally asymmetrical and branched shape, the trees were used by the local inhabitants for making „oplen“, meaning wooden parts on ox carts. Thus the name Oplenac most probably was derived.

The extraordinary geographic position of the small town of Topola, situated on the slopes of Oplenac hill, at strategically the important crossroads of the Belgrade, Kragujevac, Rudnik and Šabac roads, with its views on the neighbouring hills of Šumadija and fertile plains of the Morava valley, created conditions for this small Šumadija town to become a political and administrative centre of the liberated part of Serbia in Karadjordje’s time. The old name of Topola was Kamenica, after the river that flows next to the edge of today’s town. The present name Topola was first mentioned in the official census reports by the Austrian cartographers at the beginning of the 18th century. Legend says that a big poplar tree, whose shade provided an ideal resting place, grew up and branched at the very crossroads of the above mentioned roads, where many travelling merchants used to meet or spend the night. Soon the spot marked by the poplar tree became the name of the whole settlement (poplar = topola in Serbian). 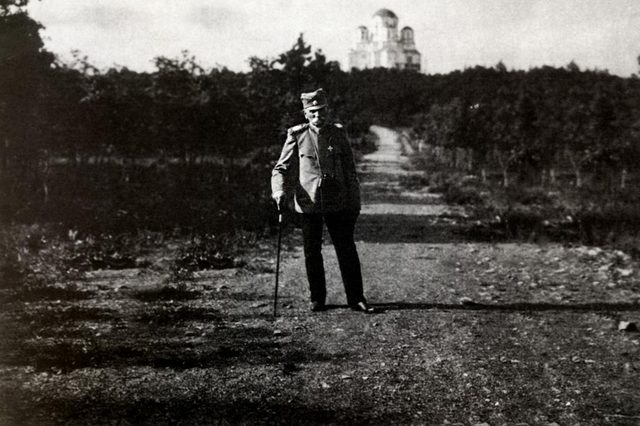 His Majesty King Peter I

Topola had its first rise at the time of the First Serbian Uprising. The leader of the Serbian revolution of 1804, Karadjordje Petrović, who was born in the nearby village of Viševac settled down there on the eve of the Uprising, next to the town, in the hamlet of Krćevac. After becoming the Supreme Leader, Karadjordje turned Topola into his capital and the administrative centre of newly liberated Serbia. From 1811 to 1813, the town was fortified, surrounded by a moat, with three stories towers and palisades. Inside the fortified town there were family and guests quarters, as well as the church of the Mother of God, known as the Karadjordje’s church. The belfry was in the south-east fortress tower, and the three bells, cast in the Lower Belgrade Fortress foundry, were the first ones that tolled in liberated Serbia. However, after the Uprising had been crushed and the Turkish army had returned to Serbia, Karadjordje’s town was burned to the ground. Later on, with the rise of Prince Miloš’s power and after the assassination of Karadjordje, Topola, naturally, lost its original importance.

This region saw its new shining moment during the rise of Karadjordje’s son, Prince Alexander, who restored his father’s vineyards and orchards on the eastern slopes of Oplenac hill with special care, building a large house with a wine cellar. By restoring his father’s endowment, Prince Alexander attracted the wealthy and prominent people from the region, so Topola quickly developed into a nice small town with solidly built houses and shops. The return of the Obrenović dynasty to the throne in 1858, and their reign in Serbia until 1903 marked a long period of neglect and stagnation of Topola region. After the assassination of Prince Mihailo, the Regency proclaimed Karadjordje’s estate state property and put it for auction. The inhabitants of Topola and neighbouring villages managed to gather funds and bought the Karadjordje church for their parish. However, after the anti-Obrenović Topola rebellion was crushed in 1877, the neglected remains of Karadjordje’s fortress were razed to the ground.