History of the construction

Immediately upon assuming his royal duties in 1903, His Majesty King Peter I acted swiftly to fulfil his parents’ legacy, and utilizing the atmosphere of national enthusiasm and his personal funds he built the dynastic crypt on the model of many similar royal mausoleums in Europe, but also following Orthodox tradition. The King chose a spot 337 metres on the top of Mali Oplenac hill, which almost imposed itself as the ideal location of the future church. The location was measured by land surveyors, so the altar would face east according to Orthodox tradition, and all necessary technical details were ready for the public tender. On 1 December, 1903, the national tender was made, for the construction of the church and the crypt. There was an appropriate ceremony on the occasion, and the tender specifically demanded the monumentality of the Serbian-Byzantine style. Just as with many other capital projects in Serbia, so it was this followed by long and fierce polemics and discontent with the awarded work. Little is known about the course and the results of the first tender for the Oplenac church, except that it had caused huge public controversy. Among 18 submitted entries, the winning prize for the tender was given to architect Nikola Nestorović, a famous architect and university professor. After a long and animated expert discussion and public polemics, on September 27, 1907, the cornerstone was laid, and the Charter dedicated to St. George was placed in the foundation, and the future site of St. George church in Oplenac was consecrated.

Due to the King’s own displeasure with the proposed solution, another tender in 1909 was launched. The committee was made up with basically the same previous members. The committee awarded first prize to the young architect Kosta J. Jovanović. Although rather young, he readily and studiously approached the construction, as a testified expert on Serbian medieval architecture. His inventive and splendid solution with five cupolas and cross shaped base impressed the King and met the strict criteria of the committee. On 1 May, 1910 construction started following the Kosta J. Jovanović’s plan. By the end of the year, the church was already under the dome. During the construction it was decided that the façade of the church would be made of white marble, which came from nearby Venčac Mountain, known even today for its exceptionally white beautiful marble. The Serbian Archbishop Dimitrije consecrated the church on 23 September, 1912. Because of the difficult political situation, it was considerably more modest than it had been planned. Just a few days later, King Peter was on the battlefields of the First Balkan War. During pauses of the 1912-1913 Balkan Wars and the First World War, there was also a pause in the construction of the church. When Austria-Hungary occupied Serbia in the winter of 1915, the church was looted – the copper cover was removed from the dome, roof and portals. The lighting conductor was also removed as well as the bells. Many windows were broken including little marble pillars and ornaments. Using the excuse that important records might be hidden the occupiers desecrated the graves in the crypt. 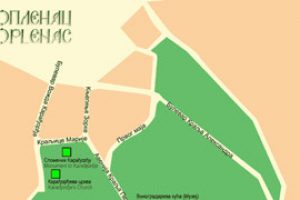 Returning to the liberated homeland and to the historical creation of the Kingdom of the Serbs, Croats and Slovenes, Peter I was not able to see the completion of his foundation. The king died 16 August, 1921, and his successor His Majesty Alexander I took over its completion. He modified the original plan. Alongside with the clearing of the western slope, intended for vineyards, the planting of trees also began, and their thick crowns very soon highlighted the whiteness of the temple in perfect contrast. After the reconstruction of the crypt, by Kosta J. Jovanović, this was followed by the iconostasis, the lightning conductor, then a new copper roof with golden edges on the dome. The bells were made by Frères Piccard from Annecy le Vieux, France, and the mosaics were made by Puhl & Wagner from Berlin, Germany. The bronze chandelier was made by Luks, Zagreb, Croatia. All the details of the sumptuous decoration of the temple were supervised by Nikola Petrovič Krasnov, a former Russian imperial architect and leading architect of King Alexander.

The church was once again consecrated on 8 September, 1930 by Patriarch Varnava, in the presence of the King and members of the Royal Family, and then Karadjordje’s remains were re-buried from the old Topola church into the Royal Mausoleum.

Because of its exceptional qualities, the temple of St. George in Oplenac was added to the Monument of Culture of Exceptional Importance list in 1979, and it is protected by Republic of Serbia.